Google has rolled out a major upgrade to Search…

“The new algorithm, codenamed Hummingbird, … the first major upgrade for three years … is especially useful for longer and more complex queries. … more capable of understanding concepts and the relationships between them rather than simply words”

Google has obviously demoted Google Scholar over the last year or so, as well as loosening the content-inclusion parameters. Max Kemman now asks: will Google close down Google Scholar? The article notes that…

If he’s correct, there may be another reason for it. Have people in Google taken a good look at the slow-but-sure progress of Microsoft Academic Search, and found they don’t like what they see? Is Google wary of waking up one day to find that the Microsoft tortoise has once again executed its traditional killer slow-mo back-flip karate on a competitor hare?

“three hundred (N= 288) humanities scholars in the Netherlands and Belgium … General search systems such as Google and JSTOR are predominant, while large-scale collections such as Europeana [a repository of digitised versions of “Europe’s cultural and scientific heritage”] are rarely consulted. Searching with keywords is the dominant search strategy and advanced search options are rarely used. When comparing novice and more experienced searchers, the first tend to have a more narrow selection of search engines, and mostly use keywords.”

“During the glory days of radio, it was illegal to mimic the voice of the US president.” Was there actually a law prohibiting that? Or was it just a White House policy and not a legal issue?

I didn’t use any of the resources suggested. I simply pasted the question into the main Google Search, cut back “glory days”, wafted around a bit and swiftly found an indication that it was a Will Rogers who first impersonated a U.S. president on radio. Admittedly I do have my Google Search results fairly streamlined and filtered and ad-blocked. I only looked at the text snippets in the search results, and didn’t waste time clicking through.

In the next moment I formulated a Google Books search…

…and instantly hit a University of Massachusetts Press book with full-view preview pages, The Dance of the Comedians: The People, the President, and the Performance of Political Standup Comedy in America, 2010. The link landed me on the correct pages, which gave the detailed story of those early radio years in a scholarly chapter. I was able to get/skim enough pages to put me on the right track, although I didn’t bother to page through to see if the actual endnotes were available. This was just a first pass.

Cutting out the “Will Rogers” name and then running the search query again as: “radio” “impersonation” “president” in Google Books gave me (first result) a full-view preview of pages inside the book The American President in Popular Culture, 2005. My first instinct was to find the publisher, as publisher details were missing for it in the Google Books sidebar. But a quick tickle of Amazon showed the book to be from Greenwood — another reliable scholarly publisher, known for their popular culture guides and encyclopedias. The landing page for this book was perfect and succinctly continued the story of presidential vocal impersonation through to the Kennedy era and into the 1990s. This initial two minutes of searching had landed me amid the precise keywords and names needed to dig out primary sources and deeper scholarship, had I wanted to.

At this point I was still at the stage of very quickly skim-reading a couple of pages of the books, to ensure I was on the right track. I had enough to be able to go back and pin down the answer to the question about the “glory days” (1920s). Also to know where to start to begin to answer the second part of the question, which specifically asked about the written law.

But at that point I knew intuitively that I could fairly swiftly also find out if impersonation was actually banned by law during: i) the authoritarian years of the later New Deal (in the late 1930s, with war approaching and FDR touchy about his image, the big radio networks such as NBC and CBS apparently did not allow him to be impersonated); ii) during wartime; and iii) during the 1950s Cold War. I had already triangulated my rough initial framework well enough, to be able to roughly bookend the search period in my mind: Will Rogers used presidential impersonation frequently, and Kennedy loved being vocally impersonated. I already knew that in the 1970s ‘Tricky Dicky’ was knee deep in aggressively free-speech hippies, so he was unlikely to ban anything like that. Reagan apparently enjoyed being impersonated. So I would only have to go back and check for national laws circa 1937-1957, and at the same time keep an eye out for obscure per-state and city laws while putting together the complete timeline for the 1920-1970 period. Only at that point might I have hit search tools for online legal rulings — it would have been pointless to start with them.

A new Twitter keyword search-engine, http://www.topsy.com. Pretty good at helping you find a useful little egg, amid the vast guano-splattered nest of useless fluff that is Twitter. Sadly you can’t pluck out an RSS feed for a regular search, at least in the free version.

Got a multi-column academic paper in PDF? Papercrop is free Windows desktop software that reworks the PDF, so that it’s perhaps more readable on some types of mobile e-reading devices. 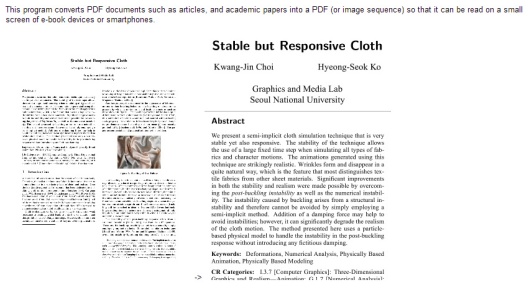 Well, that’s one way to keep university presses alive, start to merge them with the government. $12m Aus. will fund…

“a consortium of government and university presses in Australia.”