Lots of press chatter in the last few days about a not-yet-public new academic search engine from Helsinki Institute for Information Technology called SciNet. It seems it’s been in development for some years. Here’s a screen capture of the UI sliders seen briefly in the video… 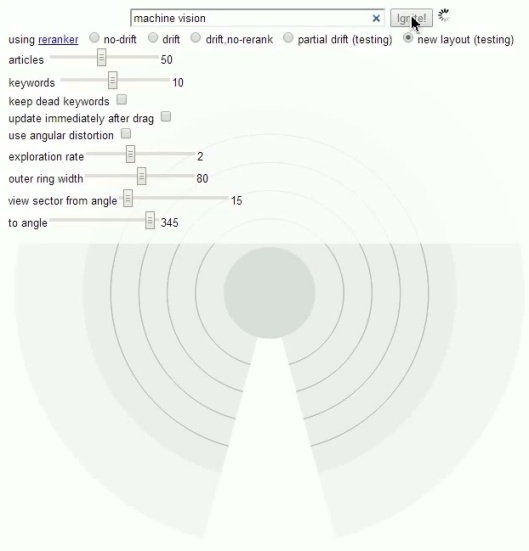 But the sliders made me think I’d like to see Google offer such a set of fine-tuning sliders, to change a variety of their currently fixed or on/off search parameters. Although I guess that might then be gamed by the SEO hucksters to winkle out a few of the secrets of Google’s algorithm weightings.

Here’s a new group test of academic search tools for open access or otherwise free academic papers. It follows JURN’s recent large number of additions of ecology related sources. Specifically it looks for recent (2013-) work in a rapidly developing and important niche of marine science. The plastic-biodegrading microbes that live on the “plastisphere” (tiny sub-5mm fragments of plastic now found throughout much of the world’s oceans, in the surface layers or also embedded in seabed silt). At a pinch, I have sometimes accepted relevant recent work on oil biodegrading bacteria living in the oceans, when it seems to suggest mechanisms or pathways. None of these marginal acceptances occurred in JURN’s results, though, so this gives other search tools an advantage.

1. OUT OF DATE RANGE. Laboratory Test Methods to Determine the Degradation of Plastics in Marine Environmental Conditions (2012)

2. Isolation of microplastics in biota-rich seawater samples and marine organisms (2014)

4. OUT OF DATE RANGE. The spectroscopic detection and bacterial colonisation of synthetic microplastics in coastal marine sediments (2012)

5. High-levels of microplastic pollution in a large, remote, mountain lake [in Mongolia] (2014)

7. Isolation of microplastics in biota-rich seawater samples and marine organisms.

8. VALID. CIESM Workshop Monographs, No.46: Marine litter in the Mediterranean and Black Seas (2014). Contains three full-text papers: “Bacterial degradation of synthetic plastics” and “Microbial biodegradation of synthetic plastic polymers: state of the art and perspectives from the BIOCLEAN project” and “Surface properties of marine microplastics that affect their interaction with pollutants and microbes”. But this was counted as a single result.

9. Proceedings of the GESAMP International Workshop on microplastic particles as a vector in transporting persistent, bioaccumulating and toxic substances in the oceans (2010)

12. VALID. The plastic-associated microorganisms of the North Pacific Gyre (2013)

13. VALID. Plastic Degradation and Its Environmental Implications with Special Reference to Poly(ethylene terephthalate) (2013)

15. Monitoring the abundance of plastic debris in the marine environment (2009)

Google News once again proved a somewhat useful source even without any keyword forcing, surfacing a manageable number of useful topical articles from as far back as 2013, such as:

However News also surfaced simplistic (and in most cases wrong) claims that plastic “doesn’t biodegrade” or never degrades, all in a range of low-grade news sources.

Do we need a unified tool for discovering online versions of primary history sources? THATCamp AHA 2015 has a proposed session on the need for new tools to find primary sources online.

Pinterest for chaps. If you’re registered as male, Pinterest now applies an auto-filter that draws other Pins by known male users to the top of the search results. It works well with a single keyword, but their search seems to go a bit haywire when two keywords are used. For instance, here are my top results for [ caps mens ] none of which is the kind of traditional Irish tweed outdoors cap or baseball cap that you might be looking for…

Amazon’s new Kindle Textbook Creator Beta helps you convert PDFs of your textbooks, course notes, study guides and other educational content that includes complex visual information like charts, graphs and equations into Kindle books. Books created through Kindle Textbook Creator take advantage of features that enhance a student’s learning experience such as dictionary look-up, notebook, highlighting and flashcards. Plus, preview your book across all supported devices.”

Highlighting is a technique of very dubious worth, on a par with hucksterisms such as ‘preferred learning styles’. A recent survey in Scientific American, of what has been robustly proven to work, stated of underlining and highlighting…

In controlled studies, highlighting has failed to help U.S. Air Force basic trainees, children and remedial students, as well as typical undergraduates. Underlining was ineffective regardless of text length and topic, whether it was aerodynamics, ancient Greek schools or Tanzania. In fact, it may actually hurt performance on some higher-level tasks.”

Flashcards are probably bad for English language learning at the infant/junior level, where actual active use of the language and reading of whole books is to be preferred. But cards do seem to be useful for undergraduates when used as quick prompts, enabling the recall and ‘sharpening up’ of key ideas encountered in recent reading or listening.

HEFCE report on Monographs and open access is out now…

The perception that academic books are not being read, or even read in depth, does not appear to be sustained by the evidence.”

A quick search and read-through of the main report shows no use of the words “index” or “indexing”, in the context of discovery. There are only fleeting and cursory mentions of “discovery”. Discovery for download-and-reading barely merits a full paragraph…

There appears to be disagreement about whether providing open access to a book without active measures to disseminate it is sufficient. … the rise of aggregation and distribution services for open-access books, as well as increasing sophistication in search engine technology and an ever-greater reliance among academics and others on the Web as a discovery tool, might help smaller operations to challenge the larger publishers … For policymakers this is a critical area of concern: a key benefit of open access is surely increased dissemination; if particular models are likely to fail in this regard, then the benefit could be lost.”

It would have been interesting to know if the current standard monograph practice requires that the author must submit a publicity and marketing plan along with their open monograph. That practice isn’t mentioned, so I wonder how often it happens in the UK. It seems a pity to overlook active paid-for marketing, of the sort that proper publishers take for granted. Especially when there might be an opportunity now to embed this widely for even the most diffident or overworked authors, potentially enhancing everything from the scholar’s career and the university’s standing through to the UK’s wider projection of ‘soft power’. So the report might have suggested (at least) a new flowchart / guide for planning some basic academic book marketing, and a requirement that it be completed and submitted along with the monograph. Something that would take just six hours to enact, by someone other than the author (one has to factor in how utterly sick of a book an author can be by the time it’s completed, and how they just want to see the back of it). Asking for specifics such as a list of Facebook groups and listservs etc; contacts for likely book reviewers; magazine and newsletter contacts for tailored press releases; ‘local author writes book’ local newspaper contacts (since their stories, naff though they may be in tone, show up in Google News); niche radio and podcast interview possibilities, and so on. Such a one-day publication-day campaign might then most usefully be handed off to a freelance marketeer on oDesk for $350 or so, rather than be dumped on someone who either lacks the skills or doesn’t have the time.

Note that there’s also an “Annex 3: Patterns of scholarly communication in the humanities and social sciences” for the report…

Humanities and social science researchers also seem to make significant use of relatively old content, compared to other disciplines. Tenopir et al (2012) find that around half of the ‘last articles read’ in the critical incident component of their survey were more than 6.5 years old; a quarter were more than 15 years old.”

NEH and Mellon will give [$1m in] grants to publishers to identify great humanities books [in copyright, but out-of-print], secure all appropriate rights, and make them available for free, forever, under a Creative Commons license [as .ePub files …] Books proposed under the Humanities Open Book program must be of demonstrable intellectual significance and broad interest to current readers.”

Only one of the [titles] is present in Web of Science, and two of them are in Scopus.”

This wasn’t a test of Open Access visibility, since on a quick investigation it seems the chosen titles are all paywalled. Three are published by Reinhardt Verlag, which are the journals indexed at 100% or very near by Google Scholar. Which to me suggests that for larger publishers Scholar may be doing a much better indexing job than Web of Science or Scopus. Google Search itself sees all of them, if only at the title/abstract level.

Unterrichtswissenschaften and back issues (Paywalled)

Empirische Padagogik (Paywalled, TOCs seem to be Web-accessible only via their listings on PubPsych)

Libraccess on GitHub. Aiming for…

1. Harvesting and indexing of documents, data and code contained in open access repositories, using their APIs.
2. Supply of services based on this index: search of documents, authors, university profiles…

It’s 2015 and it seems there are still some people moaning about seeing adverts in search and online generally. They obviously still haven’t heard about the free automatic advert blockers available for Web browsers. If you know one of those people, simply get them to install the following the ‘core four’ browser add-ons:

Adblock Plus
Adblock Plus Pop-up Addon
Element Hiding Helper for Adblock Plus
F.B. Purity – Clean up and Customize Facebook

Unfortunately there’s still nothing that can routinely and automatically block the stupid “sign up to our newsletter!” / “take our survey!” screen-dimmers.